What is Nebbiolo? An introduction to one of Italy’s most revered grapes.

Ever been with a group of winos talking about a grape you don’t know…only to find out it’s the grape of the wine you are drinking? Don’t worry, it’s not uncommon. There are so many grape varieties out there it’s hard to keep them all straight. Especially if you are more familiar with wines from New World regions.

You see, in the New World (think California, Australia) the variety is emphasized. That’s why we so readily know grapes like Cabernet Sauvignon and Chardonnay. In Old World wine regions (think France, Spain, Italy), the focus is on the region. Wines labeled “White Burgundy” are Chardonnay from Burgundy, France. “Red Burgundy” is Pinot Noir. Barbaresco and Barolo wine are made from this grape.

Got questions on that last one? That’s exactly why I’m doing this post. Let’s talk about wine from the nebbiolo grape. 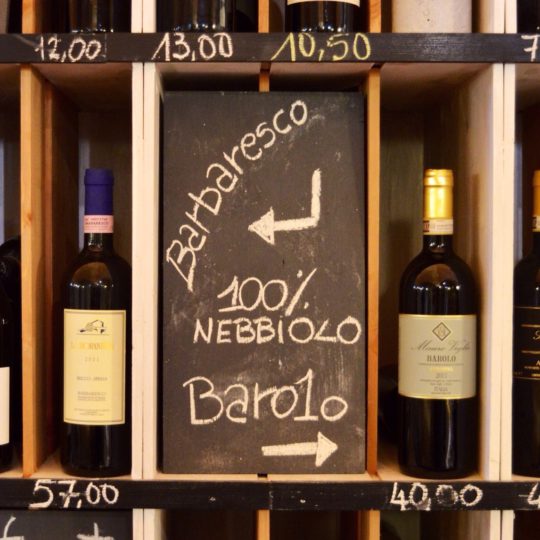 Nebbiolo is a black grape variety that lives almost exclusively in Italy. It is a thick-skinned grape known for both high tannin and acidity. Nebbiolo is most commonly associated with Northern Italy’s Piedmont region where it has grown since at least the 13th century.

There are different theories on the origin of the name. It most likely comes from the Italian word meaning fog, nebbia. Traditionally Nebbiolo harvest took place in October when the fog settles over the area’s sloping vineyards.

What’s fog got to do with it?

That autumn fog burns off slowly during the day, providing cooler temperatures and slow ripening. This is known as hang time for the grape. It allows the slow development of Nebbiolo’s hauntingly beautiful aromas and flavors. Extended hang time also produces those forementioned high levels of tannin and acidity – both important factors in the balance and ageability of Nebbiolo.

Nebbiolo needs particularly careful site selection as it is not only late-ripening but also early flowering, so there is no point in planting it anywhere that might suffer from spring frosts. Hence the suitability of the slopes of the Langhe hills. Nebbiolo is popularly thought to take its name from nebbia, Italian for the fogs that characteristically drape these hills in autumn, further restricting any ability to ripen late in the growing season. Growing Nebbiolo is a question of precision engineering – not least because the vines are naturally vigorous and need extremely strict treatment in the vineyard if they are not to waste all their energy on sprouting leaves rather than ripening fruit.

The richness of the nose is one of Nebbiolo’s most loved traits. The bouquet shows aromas of tar, raspberry, chocolate, licorice, and truffles. For all the depth in Nebbiolo wines, they are surprisingly light in color and generally don’t really start to show their beauty until after 10 years when the tannins have softened.

The best expressions of the Nebbiolo are from Barbaresco and Barolo wine- both made of 100 percent Nebbiolo as per DOCG regulations. Though, the two winemaking areas only make up about three percent of the total production of Piedmont wine.

More than a few times when talking about the grape as it relates to Barolo wines I’ve seen confused looks. Then, the question, Wait – what is Nebbiolo? The answer is that ebbiolo is the grape of Barolo.

Barolo is both a region in Piedmont and a village in the Barolo wine-making area. Eleven communes are designated Barolo wine producing areas. But, almost 90 percent of the Barolo DOCG wine produced comes from five of those: La Morra, Barolo, Serralunga d’Alba, Monforte d’Alba, and Castiglione Falletto. Barbaresco is slightly smaller than its neighboring winemaking area of Barolo. It is made up of three primary communes: Barbaresco, Neive, and Treiso. Parts of San Rocco Seno d’Elvio also fall into the designated Barbaresco DOCG production zone.

While Barbaresco is only roughly 25 km / 15.5 miles from Barolo, the climates are markedly different. Barbaresco has a slightly maritime influence with warmer, drier, and more mild conditions. Grapes ripen earlier than in Barolo and as such the tannins are softer, making the wines more approachable sooner.

Barbaresco wines are considered more elegant. However, that is a very generalized description. The more you taste the more you realize it varies by vineyard, producer, and winemaking style.

The Roero and Nebbiolo

“What is the Roero?” is another often asked question with Piedmont wine exploration. Well, take note. The Roero is a cost-effective alternative to Barbaresco and Barolo wine, something to know as global popularity – and bottle prices – rise.

The Roero sits across from Barbaresco, separated by the Tanaro River. It has sandier soil that is rich in sea fossil residue. The wines show more finesse and are approachable younger making them a great economical alternative to their more expensive counterparts, without compromising quality.

Continue your nebbiolo exploration with other wines from Northern Italy.

More on Nebbiolo from Alto Piemonte and Lombardy:

Now, go out and drink some Nebbiolo!

That’s my answer to What is Nebbiolo? While it is my go-to wine and easily accessible given where I live, we don’t drink Barbaresco and Barolo every day. It’s just too hefty. So, we do a lot of Langhe Nebbiolo and Nebbiolo d’Alba. I know, rough life.

Drop us a note with your favorite bottles of Nebbiolo – from Piedmont and beyond!