Things to do in Verona, Italy: Here’s your starter list.

Today let’s talk about things to do in Verona. Combine it with our Insider’s Guide to Verona Restaurants and A 48-hour Guide to Verona Travel for the fundamentals of visiting the city.

1. Start with a Verona city tour

The city of Verona dates back to 4th and 3rd century B.C., becoming a Roman city in the 1st century. Verona’s 2000-year-old ancient structures remained largely well-preserved until the 19th century with the city walls buffering the historic center from industrial development and railways. However, Verona did suffer notable damage in WWII; post-war reconstruction was carried out with great care and precision, maintaining much of its original structure.

That said, in terms of things to do in Verona, start by acquainting yourself with the city through a guided half or full day city tour. This makes the most of your time with an introduction to both the landmarks as well as hidden gems (a Roman wall in the base of the shopping mall – what!?)

We recently explored the city with Verona tour operator Romeo and Juliet Guide. It was our first time really digging into the history. We were fascinated to learn that Piazza Bra, just outside the Arena, was once considered outside of Verona’s city center. We enjoyed a visit to the market in the vibrant Piazza delle Erbe – once the location of the Roman Forum and chariot races. Just behind that, they took us to the quieter Piazza dei Signori where you’ll find a statue of Dante that was erected in 1865.

The outing also included wine and food with a sampling of typical Veronese salumi, stortina, made from a recipe that has been passed down from generation to generation. One of the best parts of that day was the time spent just walking the streets, talking about the architecture and way of life for the locals.

Try it! Verona Tours by Romeo and Juliet Guide

Sigh. One of our favorite things to do in Verona is to just stroll. The city oozes with character amongst medieval and Renaissance architecture. The cobblestone streets, while endlessly charming, can do a number on your feet, so pack comfortable walking shoes for long days out.

One of our favorite walks is to the Castel San Pietro on Colle San Pietro (Saint Peter’s Hill). It is a few hundred meters above the Roman Theatre – don’t forget the water. Take the stairs from Ponte Pietra to reach the top and expect some heavy breathing. Your hard work is rewarded with a truly breathtaking view of Verona. 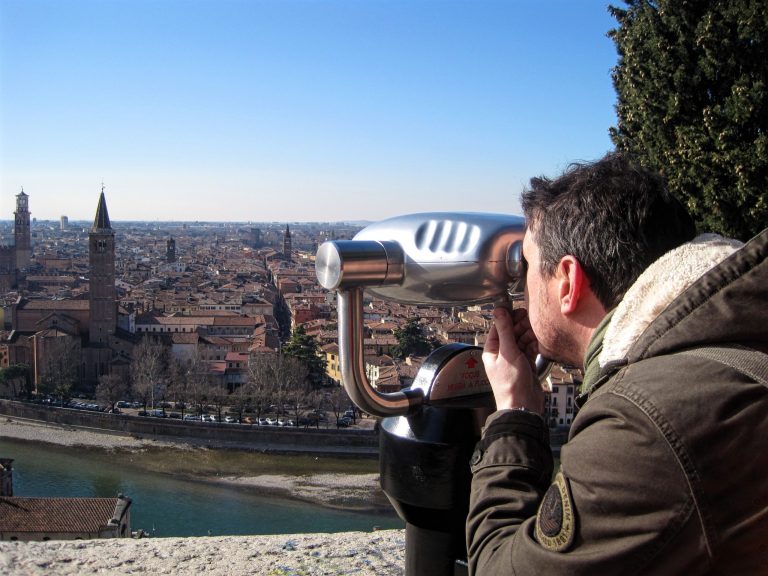 3. Aperitivo and the Arena

Seriously, that view! Head to Hotel Milano’s Terrazza bar to see the Arena from a different vantage point. The Terrazza bar is on the 5th-floor and opens at 15.00 / 3 p.m. serving aperitivo of wines and cocktails as well as local plates. You can even do dinner there. Book that during the Verona Opera for a meal you won’t soon forget!

The Arena itself dates back to the year 100, (yes, that is the 1st century A.D.) When it was built by the Romans, the Arena was outside the city walls. As noted previously, the Arena and Piazza Bra were located at the margins of the urban area. Second only to Rome’s Colosseum, it is considered one of the best-preserved buildings in the world. The structure is made of the pink Veronese marble and seats some 30,000 people. Its early use was for gladiator matches. Definitely a must on your list of things to do in Verona!

Letters to Juliet is really a thing to do in Verona. The story goes that the Juliet letters began in 1930 when the guardian of Juliet’s Tomb, Ettore Solimani, collected prose left at her grave. So touched by the emotion of those letters, he began replying to them in Juliet’s name. In 1972, a group of artists and scholars, led by Giulio Tamassia founded The Juliet Club and carried on the work started by Ettore.

Today thousands of lovelorn people from all over the world send letters to the Shakespearean heroine. Armed with a team of volunteers, The Juliet Club answers each and every one, signed in Juliet’s name.

While in Verona, visit The Juliet Club and reply to one or multiple letters as a Secretary of Juliet – all languages welcome.

Find it! The Juliet Club

Of course, wine tasting is among our favorite things to do in Verona. In the city center, visit the historic Bottega del Vino to take in not just local wine, but also local culture and history.

The Bottega itself dates back to the Venetian Republic period in the 16th century when it was known as the Osteria Shield of France. In the 18th century, the Austrians turned it into Biedermeier, then it became the Bottega del Vino in 1890. In 2010, the Bottega was purchased by Le Famiglie Storiche, an association of 10 historic wineries from the Valpolicella. The Families sought to preserve the heritage of the establishment where great poets, painters, artists, and more once met to debate and exchange ideas over the wines of the land.

Today visitors explore the wines of the region and beyond with the monthly blackboard list of wines by the glass. Click for the blackboard selection of wines at Bottega del Vino for the coming months.

6. Take a day trip to Venice

Considering a trip to Venice on your holiday? Make it a day trip from Verona to Venice. Each day, about 72 trains pass between Verona and Venice via Trenitalia, so you have plenty of options to get there and back.

Verona and Venice are separated by just 120 km / 74.5 miles by train. We don’t recommend driving as cars are not allowed onto the islands, so you’d have to leave your vehicle outside the city. That means finding and paying for parking, then getting yourself inside.

Trains run about twice an hour. Expect about 1:10 to 1:30 of travel time for most routes; tickets are about 9 to 27 euros each way.

Once in Venice, take a Vaporetto ride, visit the market to see (and, to smell!) the fresh catch, enjoy a glass of Soave along the canal, walk in San Marco Square, and above all else, get lost in Venice. It is pure magic.

Just 30 minutes by car is the Valpolicella wine region making it a natural for our things to do in Verona list. I mean, you gotta drink, right!?

My solo trip to Italy in 2010 included a trip to Verona just to explore the wines of the Valpolicella – specifically Amarone. It’s pretty amazing to see the grapes drying, a 3500-year-old technique.

Amarone adventures at #anteprimaamarone. Did you know it didn’t become a DOGC until 2010!? #winegeek #verona #valpolicella

Romeo and Juliet Guide offers Valpolicella wine tours and we visited a producer as part of our day with them. A driver picked us up in Verona, then we headed into the hillside with stops at some historical winemaking locations.

Our visit to Tenuta Santa Maria Valverde included a paired tasting with a selection of local meats and cheeses in a perfectly cozy tasting room surrounded by vineyards. We tasted the Valpolicella Classico Superiore, Ripasso, and Amarone. Normally the stop includes a vineyard walk, but unfortunately, we had to limit ourselves to the cellar tour so we could get home to our sick toddler. So, we will be making a return. Hopefully, Il Ragazzino can join us. He’d love the rambling farmhouse and vineyard space!

And, there you have it – seven things to do in Verona!

There are so many activities in Fair Verona, please share your favorites in the comments!

Check out our Insider’s Guide Verona Restaurants to plan your dining experiences while there. And, don’t forget to read A 48-hour Guide to Verona travel for the basics of navigating the city. To keep the information coming, sign-up for Girl’s Gotta Drink in the top right or follow me on Instagram.