Okay, so you may have already read our piece on Barolo wine pairing. Since Barbaresco and Barolo are both made of 100 percent nebbiolo grapes, it seems natural to think that the wines will have the same pairing profile.

Barbaresco and Barolo: A tale of zones

The Barbaresco and Barolo winemaking areas may only be about 25 km / 15.5 miles apart, but minor climate differences factor into taste profile variance. While the Langhe as a whole is considered a continental climate, Barbaresco is often noted as a slightly maritime climate.

The climate of the Langhe:

The Apennines protect the Langhe hills from currents of air from the sea. Masses of air from the Mediterranean sea meet the air coming down from the Alps, preventing cold currents of the north from hitting the hills. Frequent natural climate fluctuations can be appreciated in the glass with every different vintage, producing endless flavors and perfumes.

Today I took part in a Barbaresco blogger adventure organized by @fransimo_eventi_comunicazione – not much different to the tours I am usually busy planning this time of year. We started the morning with a truffle hunt (summer tartufo nero!), picnic lunch in the woods, then an afternoon winery visit. It was great to get out and remember what it’s like being the tourist here, talking with the group about the future of tourism in the area, and post-COVID. Grazie, Fransi, @cascinarabaglio_barbaresco, @lalunadidori_truffles, @tabuiapp!

In addition, various microclimates created by the Langhe hills and valleys influence the area’s continental climate, stimulating particularly fine and aromatic nuances in the wines.

As we did in the Barolo wine pairing article, check out this cheat sheet that helps break down the basic principles of food and wine pairing. Again, this is a starting point to help you select your Barbaresco food pairings. 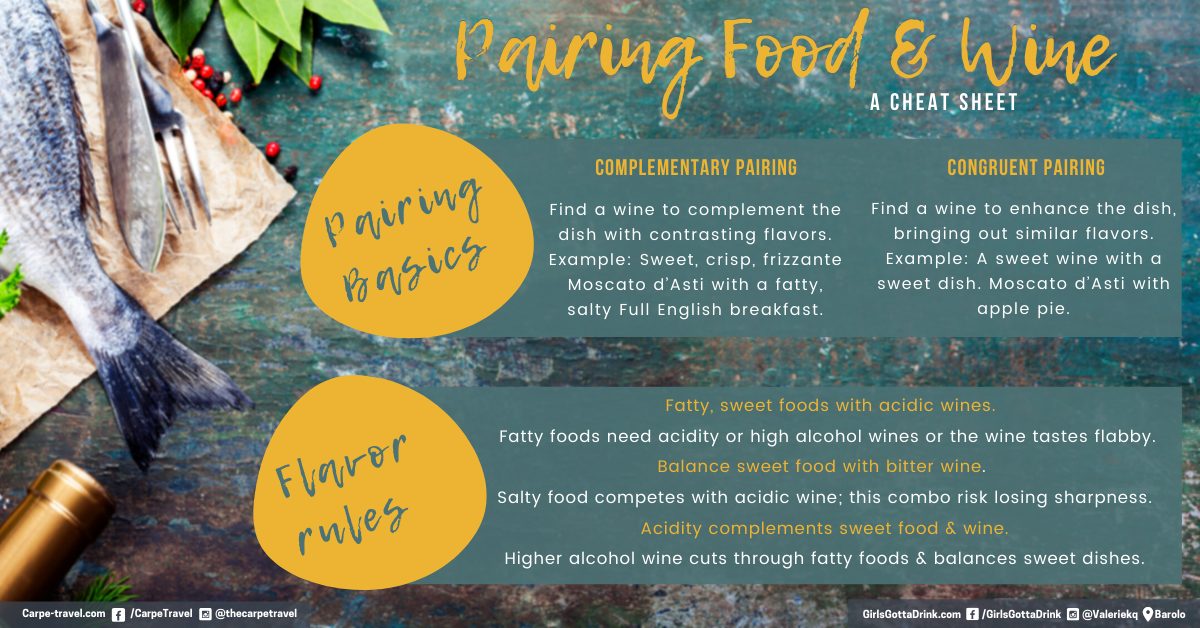 The Barbaresco winemaking region is situated northeast of Barolo. Like Barolo wine, Barbaresco is also made of 100 percent nebbiolo. However, terroir differences, make these wines just a bit different.

Still, you get nebbiolo’s great complexity, intensity, and full body. But, Barbaresco wines tend to show more elegance than Barolo’s heft and muscle. Without a doubt, Barbaresco is ageable, but often it drinks younger. However, that doesn’t mean it is immediately approachable as it’s relative to the vintage.

More classical vintages with hefty tannin need more time to soften. In the example, the 2006 vintage really only started to do this about 3 or 4 years ago, nearly 10 years after harvest.

For Barbaresco food pairing, the elegance and finesse of the wine make lighter options possible – not so much the rich, powerful dishes we think of for Barolo. Think pasta with savory tomato-based sauces, cheesy gnocchi, risotto, chicken dishes, even fish as local producers suggest.

I asked a few producers for their thoughts on unique Barbaresco food pairing ideas and was pleasantly surprised to hear fish as a go-to.

Barbaresco can be a delicate wine and doesn’t overpower the fish. In addition, the natural oils of a fatty fish marry it perfectly with the tannic structure and complexity of a Barbaresco.

Claudia Cigliuti of the Barbaresco winery Cigluiti in Neive recommends tuna tartare with avocado for young Barbaresco food pairing. Raw fatty tuna with avocado really brings out the flavor and works well with the young tannins.

For a Barbaresco from the 90s and early 2000s, she says to go for a more classic pairing of an oven-baked breaded New Zealand lamb chops; breaded with breadcrumbs, garlic, oil, mint, and lemon zest. For something a little more unexpected, she also recommends monkfish stuffed with dried cherry tomatoes, capers, and larded olives with prosciutto Cotto. The delicate, rich fish has the right depth to complement the Barbaresco.

Drop us a note – here or social media (Facebook and Instagram) with your thoughts and new Barbaresco pairing ideas!