Looking for a Cinque Terre alternative? Here are five Italian Riviera destinations that get you away from the tourist crowds.

I fondly remember my first trip to the Cinque Terre in 2010. I was solo traveling through Italy. As you might expect, wine was my focus. But, the Colorado girl in me just had to hike the magical five fishing villages I’d heard so much about.

Today, I steer clear of the Cinque Terre, not because the aesthetics bore me, but because I find the crush of tourists claustrophobic. It’s hurting the natural beauty and the way of life for those who live there. Preservation efforts are being explored in the form of visitor limitations. But, another way to offset the pressure is talking about the other incredible places along the Ligurian Sea. And, that’s just what I plan to do with this starter list of Cinque Terre alternative destinations.

Reflections of the Cinque Terre

Don’t misunderstand, I loved every minute of my solo trip to the Cinque Terre. I spent four nights in the northernmost village of Monterosso al Mare hiking two full days, befriending fellow travelers, and soaking in the raw beauty. But by the final day, I realized that nearly every person I met was from the U.S. It seemed strange to spend so much time with fellow Americans when I was so far from home. But, I enjoyed my time so much that I didn’t overthink it.

When I moved to Italy and planned a trip the Italian Riviera I realized I needed a Cinque Terre alternative. I knew the crowds had increased since that first visit and I wanted to explore lesser known parts of Italy. So, I booked a holiday rental in Rapallo.

My younger brother – and travel companion for that weekend – recommended do a hiking excursion in Levanto, just north of Monterosso. Fratello Kevino had been living in Italy for two years at that point. He lived on a military base and wanted to meet new people from new places. He knew that would not happen if we were only hiking the Cinque Terre.

About The Italian Riviera: Italy’s Liguria region sits between the south of France and Tuscany. Liguria is a crescent-shaped strip of the Mediterranean coastline centered by port city of Genoa. Running to the east is the Riviera di Levante, the coast of the rising sun, defined by rugged cliffs, turquoise coves and pastel seaside towns featuring the popular Cinque Terre fishing villages, Portofino, and Santa Margherita Ligure. Further west is the Riviera di Ponente, the coast of the setting sun, which moves up from Genoa to the border of France.

Day trip it to Portofino

The Cinque Terre isn’t the only Italian Riviera destination that is popular with the tourist masses. Portofino is a heavenly escape and a day-tripper must. Just be prepared for hefty prices – 4.50 euros for bottled water, 8 euros for a panino. Luckily, it’s in a cove, so while it gets a lot of daily visitors it isn’t as intense as the Cinque Terre. 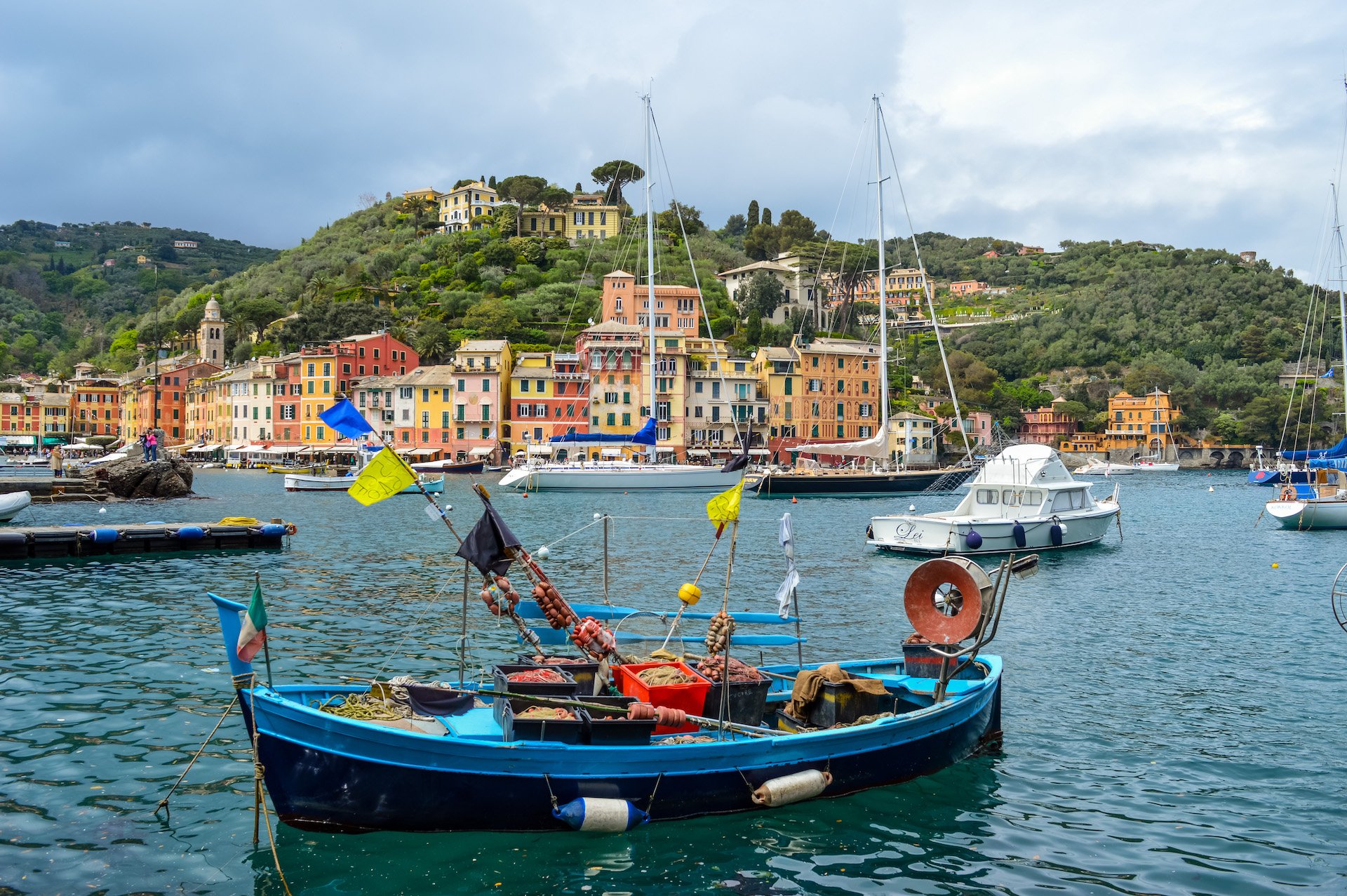 Efforts to Preserve the Cinque Terre

Today, the Cinque Terre sees close to 2.5 million visitors a year. That’s 2.5 million people in these five small, teeny fishing villages with a population estimated at 2000. The tourist number is just a bit less than the population of my beloved former home of Denver, Colo. Granted, that’s not all at once, but tourism is not year round, so it makes for close quarters in this natural treasure no matter how you spread it out.

Visible wear and tear on the cliffs and beaches tell us that the tourist traffic is taking its toll. Back in 2010, I struggled with the litter on the trails; coming from Colorado where we adhere to a strict hike-in-hike-out policy, I couldn’t believe the waste just left on the breathtaking route.

In an effort to preserve the Cinque Terre it was announced that Italian officials are restricting visitors in hopes of shaving the tourist numbers to 1.5 million. Plans are still in process, but regulations are loosely planned through pre-purchased tickets and possibly a mobile app. The initiative may take several seasons to complete full integration.

I am all for it. But, I also think it’s worthwhile branch out to other Italian Riviera destinations. So, without further ado, here is my list of five Cinque Terre alternative spots to consider when making your Italy travel plans.

We happened upon Camogli after watching Steve Coogan’s The Trip to Italy, a hilarious BBC show about two comedians who eat their way through the boot. The pair spends a night at Hotel Cenobio dei Dogi with incredible sea views from a pretty sweet looking hotel terrace.

Camogli is a fantastic Cinque Terre alternative as it is a wee fishing village that caters to a tourist crowd, meaning they are prepared for visitors. But, it’s an Italian tourist crowd, so it feels a bit more authentic. The sun-drenched beaches and village shimmer with pastel colors, glorious boardwalk eateries, and picture perfect views.

If you are into an Italian Riviera destination for the hiking, that’s another reason that Camogli is a fantastic Cinque Terre alternative. The area offers a myriad of hikes along seaside trails, ranging from 30 minutes to 4 hours. Click for Camogli Hiking Trails.

And, don’t miss La Sagra del Pesce, “Fish Festival”, one of Camogli’s most popular – and, tasty – events. Each year on the second Sunday of May the village celebrates the patron saint of fishermen, San Fortunato, with a massive fish fry. At the inaugural event in 1952 residents used six small pans for the fry-up. By 1954 they were replaced with a single large skillet that is now the symbol of the event. Today, the stainless steel pan measures 4 meters in diameter with a 6-meter handle, weighs 28 tons, and holds up to 2000 liters of frutta di mare.

Find it! Camogli is an hour drive up the Ligurian coast from the Cinque Terre. It’s connected to the neighboring villages via hills and cliffs along the sea.

As mentioned, I learned of Levanto from my younger brother during a hiking weekend along the Ligurian Coast. Levanto is a great Italian Riveria vacation destination for hikers. It is about 4 miles / 6.4 km from the northernmost Cinque Terre village of Monterosso al Mare.

It’s widely loved for its long sandy beach. Italians love their beach time and is home to some of Italy’s biggest waves, making it a popular destination for surfers from all over Europe.

The city also has a diving center right on the beach.

Find it! From Levanto, you can also easily reach the Cinque Terre by boat, train and car.

La Spezia can probably be considered the original Cinque Terre alternative. For years budget travelers have been using this primary port town as a base camp to explore the Ligurian Coast and surroundings. It’s easy to see why. La Spezia has great train access, economical lodging, and beautiful scenery. In the 19th century, the city received a charge to its economic and industrial development when the Count of Cavour ordered the building of the naval dockyard.

La Spezia is the main city along the Riviera di Levante, situated at the heart of the Golfo dei Poeti, the Gulf of Poets. The Gulf was named in honor of poets Percy Bysshe Shelley, Lord Byron, and the other famous poets, writers, and artists who spent holidays or parts of their lives in the beautiful villages and towns that dot the gulf.

Read more about Golfo dei Poeti and another Cinque Terre alternative, Portovenere. My pal Georgette of Girl in Florence has a great 36 Hours in Portovenere itinerary.

The city itself has plenty to explore, from the various parks and gardens to a host of museums. Il Marito and I did a one night stay in La Spezia in February. He found a great little Airbnb close to the train station and we feasted on fresh catch that night. There are plenty of delicious seafood options for dining and tons of wine bars for aperitivo. Drink local and try the lovely white Pigato that is indigenous to Liguria. A perfect pair with all the fish options.

Rapallo has become my go-to Cinque Terre alternative when I need a little seaside escape. I’ve done a few trips there now and one of the things I like best is how central it is to other Italian Riviera destinations. From Rapallo, you can quickly and easily visit nearby Santa Margherita, Portofino, and Camogli. All can be accessed by ferry, car or even on foot. By train, you can visit the Cinque Terre, Levanto, and more.

The picturesque resort town is the largest along the Italian Riviera. It offers a host of seafood restaurants, the Rapallo Castle, a lovely seaside promenade for leisurely walking, plenty of museums, and numerous lodging options for all price points. Rapallo’s boardwalk is a favorite visitor attraction. It looks out over the water to the large harbor and is flanked by a small medieval castle, now mainly used for exhibitions.

Find it! Rapallo can be found along the Ligurian Coast on the Tigullio Gulf. It’s situated between Portofino and Chiavari.

A mountain biker’s paradise! And, hikers like me won’t be disappointed either. I first visited Finale Ligure when some friends came out for their honeymoon. It’s just under 2 hours from Alba and the furthest north Cinque Terre alternative on this list.

An Italian Riviera destination for those looking to break a sweat – hiking, biking, and climbing give you amazing views of the area and the Italian Riviera. While Jeff hit the trails on his rented mountain bike, Carrie and I did a 10k hike. It was labeled as a difficulty level of easy, but these two active Colorado gals agreed, that was hard.

The beautiful Finale Ligure is made up of three small villages: Finalmarina, Finalpia, and Finalborgo. In the first two, you will actually find sandy beaches as well as resort amenities – sandy beaches aren’t so easy to come by in these here parts. It’s usually rocks, rocks, and more rocks. The inland portion of Finalborgo – about 1k (.6 miles) from the sea front is a medieval walled village complete with shopping and dining.

High above in the lush, exotic countryside of deep, narrow valleys and caves is where you will find the hiking and cycle trails.

There you have it, a Cinque Terre alternative for every traveler. For travel support outside of my adopted home of Barolo, including Liguria hit me up. Book Now!

And, read up on what the rest of my Italian blogging pals have to say about Liguria. Links to their musings on wine, travel, and more below.

Got a Cinque Terre alternative or two to share? Please, let us know below! We are always looking for an excuse to venture to the seaside!